All images on this site are copyrighted. They may not be used except by written permission from Otakar Priboj.
All rights reserved. 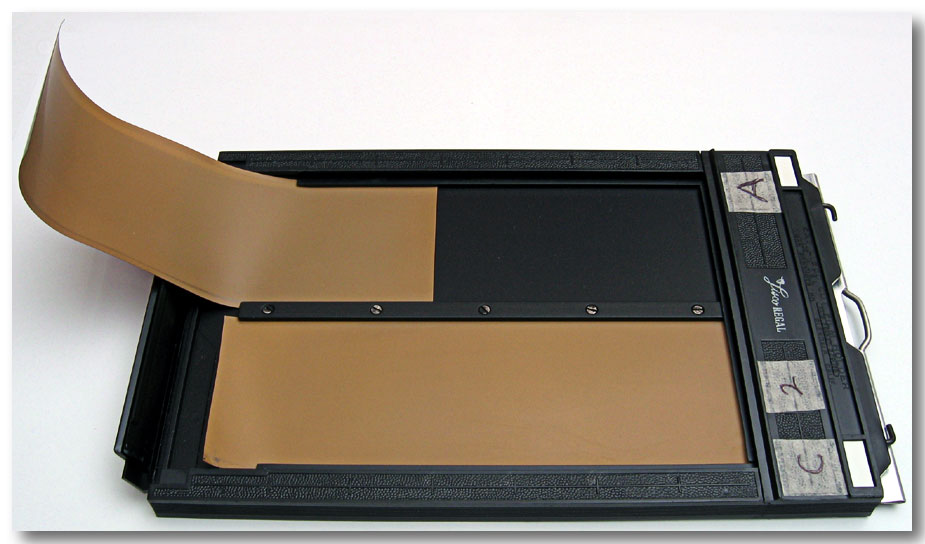 My second camera is based on maximizing  use of 120 roll film. My calculation give me 4 images and 4 mm spaces. Image size is 56 x 195 mm. Me desire was to design film holder for this image size. I was told this format its not standard and development laboratory will cut to my images. This discouragement didn't stop my desire to maximize use of the film. Finally, I made two film holders and ground glass. To fit film holders to this adapted Cambo 4 x 5 SC,  I made back standard adapter plate. This allowed me to take even wider images. With longer monorail and bellows, lens from 72 mm to 450 mm can be used. I use 72 mm SUPER-ANGULON XL and 90mm SUPER-ANGULON XL. Components are made from aluminium (6061) and black satin anodized. I machined them myself. 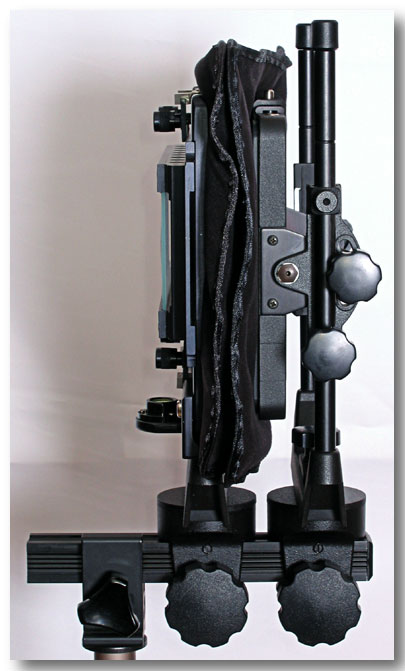 Monorail panorama camera  with 6 x 20 film back side view. Inside of 6 x 20 film back.
Back made from 6061 Aluminium, polished and satin anodized. Other materials used Stainless steel, Brass, Bronze. I have new improved design for 6 x 20 back.


My third camera its "point and shut" based on 6 x 20 film holders. Again I made back plate to fit 6 x 20 film holders and G/G. Front frame hold frame which accept Cambo lens board. Back frame have tripod mount and front can be moved for focusing. 
In year 2000 I began designing and building my 300° & 360° panoramic camera. Because of financial difficulties and I was site track to build others projects, work progress slowly. I will continue work on this camera. The frustration is that I have even more designs for panorama cameras and film holders, no time and money to build them. The results though can be improved greatly.

Image of Cambo 5x7 and 4x5 reduction back.
Image of Pentacon six.

Please if you have comment send email. E-mail Me!

Many sources believe that in the years to come we will replace traditional film with digital images. While this may be true of the amateur photographer and the commercial or technical photographer, I believe that the time honoured artistry of photography, exhibited by Ansel Adams, Yuseff Karsh, Annie Leibowitz, and other famous photographers, will continue to be recorded on film. With a single piece of equipment the camera, different film emulsions can be used to control grain, contrast, tone, and texture of an image. This image, and the lighting of the subject, is composed in the artistic eye of the photographer and captures a moment in time. While we certainly believe that digital imagery is an enhancement to the portrait photographer, and its application in portrait photography will increase, I do not believe that it is a replacement for special landscape camera.

Web-based images may be used at no cost for non-profit educational school projects and non-profit research projects by requesting via email and or letter and including a description of the use of the requested image.